The shares of Crowd Strike Holdings, Inc. (CRWD) have plunged by more than 42% from the highs that followed their initial public offering [IPO] in June. However, the steep decline in the stock has caught the attention of the investing firm Point72 Asset Management, L.P., which is run by Steven A. Cohen, the famous hedge fund manager.  According to an SEC filing on January 8, Point72 substantiality increased its stake in the equity, bringing its total ownership to over 5%.

Crowd Strike saw its stock surge following its IPO in June, finally peaking in August as valuations in the software and cybersecurity sector came into question. Shares came under more pressure in September, despite delivering better than expected earnings and forward guidance. However, the results were not good enough, and that sent the stock sharply lower. The final blow came to the company when its name popped up on a conference call between President Trump, and President Zelensky of Ukraine, in the lead up to President Trump’s impeachment investigation. 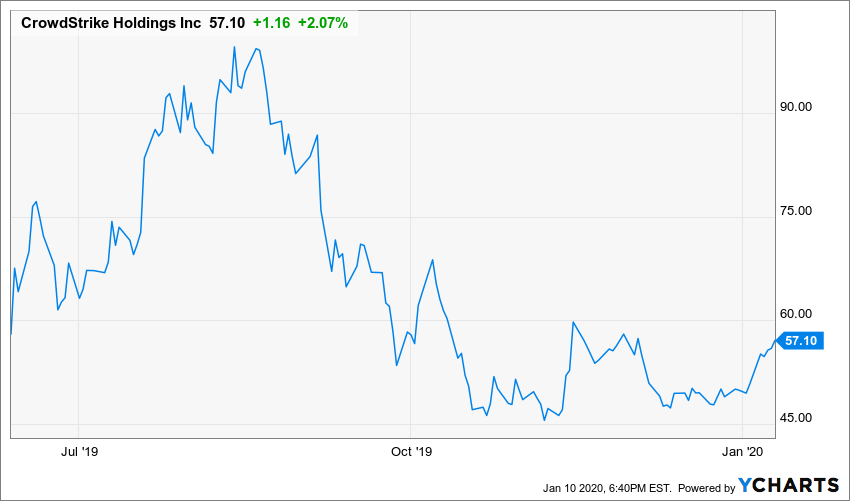 Still, a recent 13G filing on January 7 showed that Point72 increased its position in Crowd Strike to approximately 2.17 million shares from just 117,146 shares at the end of the third quarter of 2019. It gives the investment firm control of a 5.3% stake in Crowd Strike.

It seems that Point72 may have picked up their stake in the equity following a block trade conducted by Credit Suisse on January 6. The trade was for a 5 million share block of stock from an unknown shareholder. The block trade transaction would have made it very easy for a firm such as Point72 to establish a large position in the equity. 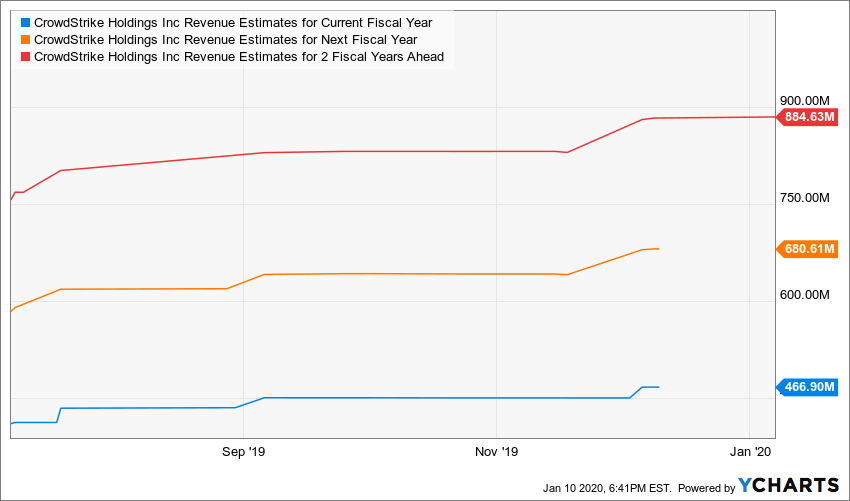 However, the big problem for Crowd Strike will continue to be its valuation, with a market value of $11.7 billion. It leaves the stock trading with a one-year forward price to sales ratio at a very high 14.5 times estimates. Meanwhile, with the company is not expected to earn a profit until 2022, and with earnings of $0.07, the stock’s earnings multiple is even more extreme at 787.

Whether Point72 took a stake in Crowd Strike as a long-term holding investment for the company’s long-term growth potential, or a trade, is yet to be seen. It is something worth keeping an eye on in future filings.

The shares of Activision Blizzard Inc (ATVI) and Electronic Arts Inc. (EA) have struggled since peaking in the late summer of 2018. Both of these stocks have seen their prices drop by around 30% since that time.  But now, some hedge funds are making big bets that both of these stocks rebound from these depressed levels.

Both stocks made it to the WhaleWisdom Heatmap for the third quarter of 2019. Additionally, they both made it to the WhaleWisdom Whale 100 Index due to the bullish activity among investors during the third quarter.  It could merely be a bet on the individual companies, or it could be a bet that the video gaming sector is ready to make a comeback in 2020. 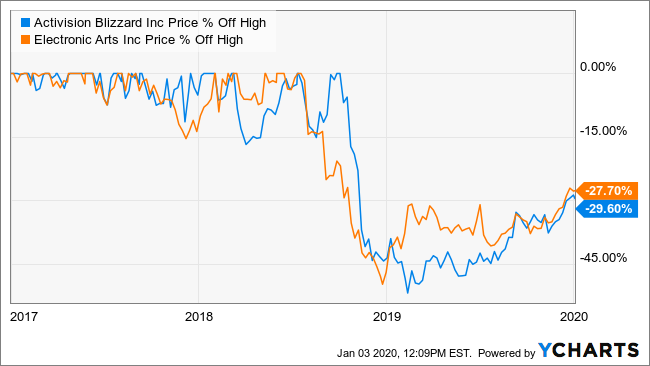 Moving Up on the Heatmap

Activision Blizzard landed at eight on the WhaleWisdom Heatmap, which was up sharply from its ranking of 88 in the second quarter. Of the 150 hedge funds tracked for the heat map, 20 of them held the stock in their portfolio. Overall, 3 of the 20 funds held the shares among their 10 top holdings. Meanwhile, during the quarter, 13 funds increased their position in the stock while 5 reduced their position. 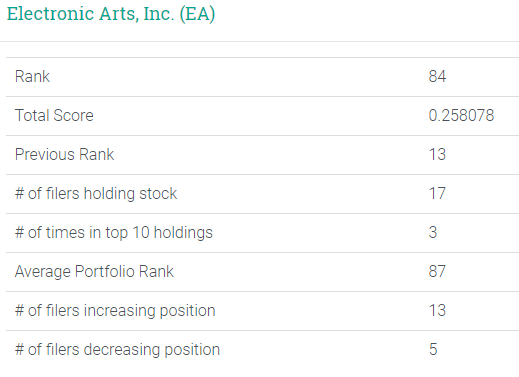 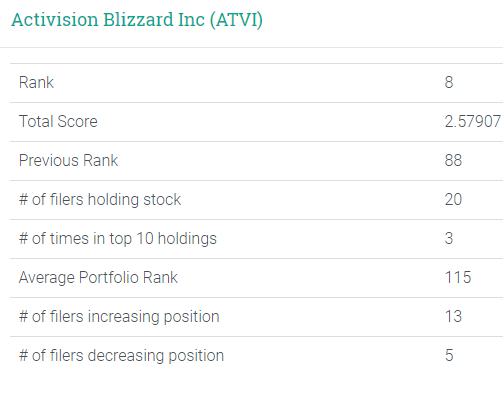 In contrast to Activision Blizzard, Electronic Arts saw its ranking in the Heatmap fall to 84 from its previous rank of 13. Overall, 17 funds held the stock, with three funds holding the stock among their top 10 positions.  In total, 13 funds were increasing their position in the stock while 5 reduced their positions.

However, while some of the best hedge funds were adding to their shares of both stocks, the broader industry was selling their shares in them. During the third quarter, the aggregate number of 13F shares held of Activision sank by 3.6% to 68.1 million, while falling by 11.4% to 34.0 million for Electronic Arts.

One reason why investors’ may be moving into these two stocks heading into 2020, is the prospect for growth. Revenue for Activision is estimated to have declined in 2019 by 12.3%, but that trend is seen reversing in 2020. Analysts currently forecast Activision to see revenue growth of almost 9% in 2020 to $6.9 billion. Additionally, earnings are expected to rise in 2020 by nearly 12%.

Both stocks trade for a similar one-year forward PE ratio, with Activision at 20.5 and Electronic Arts at 21.9. However, Activision’s faster growth rate, and lower PE multiple may make it the more compelling option, currently.

Verizon Rises to Price Not Seen in a Decade, as Hedge Funds Pile in

Verizon Communications Inc.’s (VZ) stock has underperformed the S&P 500 by a wide margin in 2019, rising by roughly 9% compared to the S&P 500’s gain of around 29%. Despite the inadequate performance, hedge funds have been actively adding shares of Verizon to their portfolios, and that has resulted in the stock landing on the WhaleWisdom Heatmap.

The heatmap tracks the top 150 hedge funds as measured by the WhaleScore calculation. The stock moved up during the third quarter to 38 from 119 on the heatmap. It would seem that investors are turning their attention to the opportunities Verizon will have on the launch of the fifth generation of wireless technology, 5G. 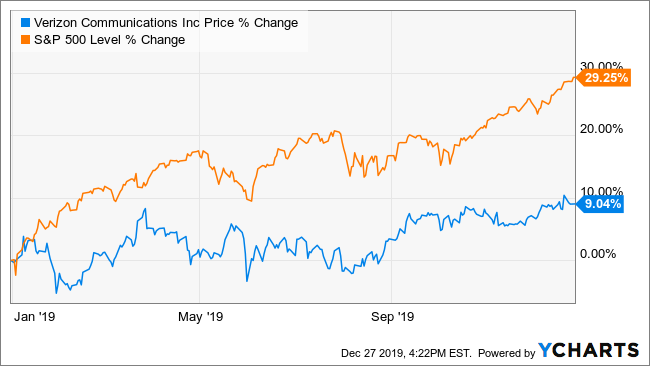 At the end of the third quarter, 21 of the hedge funds tracked for the heatmap owned Verizon. Ten hedge funds added to their positions and eight funds reduced their holdings. It wasn’t only these select funds adding to Verizon in the quarter, because overall the aggregate shares held in Verizon increased by 19.6% to 86.1 million shares among all hedge funds. There were 14 funds that created new positions and 18 that liquidated their holdings. Meanwhile, 57 funds added to their position, while 60 reduced them. 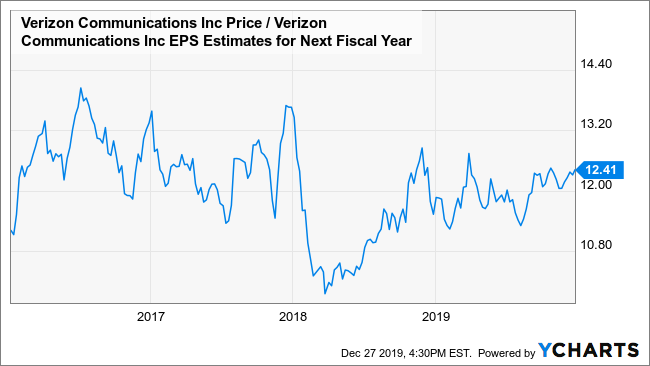 The stock does trade with a reasonable P/E ratio at 12.5 times one-year forward earnings estimates. When looking at the valuation of the stock on a historical basis, the shares seem reasonably inexpensive. The stock has traded with a P/E ratio in the range of 9.9 to 14 going back to the beginning of 2016. It would suggest that the equity can continue to see multiple expansion in 2020.

It is yet to be seen just how powerful the 5G wireless cycle will be, and just how much revenue it can generate for the wireless providers. But there is plenty of hope among investors that this will be a revolutionary enough launch to get subscribers to upgrade their wireless plans, much like the evolution from 3G to 4G helped to double Verizon’s stock from 2010 through 2013.

Pershing Square Capital Management, L.P., which is run by the famous investor Bill Ackman and known for taking concentrated bets, recently increased its stake in The Howard Hughes Corp. (HHC). A recent 13D filing revealed that Ackman significantly increased his stake in the stock on December 13.  Howard Hughes is a specialized real estate development company.

Overall, Pershing’s holding in Howard Hughes rose to roughly 6.4 million shares from 1.2 million shares at the end of the third quarter. It means that Pershing now has a 14.8% holding in the company. The filing reveals that the company is allowing Pershing the ability to buy up to 26% of the common stock. 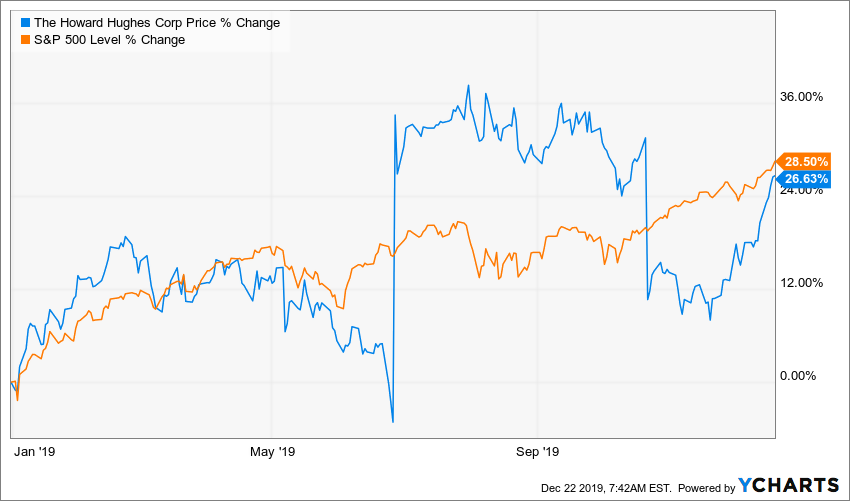 Not an Investor Favorite

The sharp rise in Pershing’s holding in the company seems surprising, given that the stock was not popular among investors during the third quarter. During that quarter, the aggregate 13F shares were unchanged at 36.3 million. Overall, 74 firms increased their holdings, and 31 created new positions. Additionally, 29 firms exited the stock and 91 reduced their holdings. 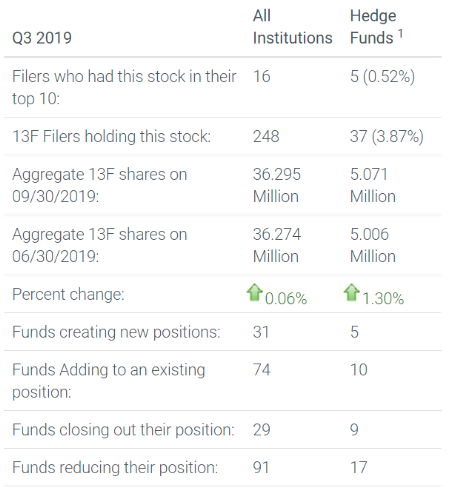 The stock certainly hasn’t had a stellar 2019, with shares rising by 26.2%. That’s less than the S&P 500’s gains of 28.5%. But still, it hasn’t held Pershing back from significantly increasing its stake in the company. One can only speculate as to why the hedge fund increased its position by so much.

The holding isn’t even a small one, with the total position worth roughly $740 million. It makes the stock the seventh-largest holding in the hedge fund manager’s portfolio. But here’s the catch, there are only eight stocks in the portfolio.

However, it is hard to argue with Ackman’s recent performance. According to data compiled by WhaleWisdom, the fund has seen its holding, and most significant position in Chipolte Mexican Grill, Inc. (CMG), more than double since they first took a stake in the stock in the third quarter of 2016. Meanwhile, its second-largest position, Restaurant Brands International Inc. (QSR), rose by over 66% since the fourth quarter of 2018. Also, the firm’s third-largest holding, Hilton Worldwide Holdings Inc. (HLT), climbed by 54% since the fourth quarter of 2018.

Pershing’s big plunge into Howard Hughes is undoubtedly noteworthy and eye-catching, considering the prospects for future growth seem lumpy at best. Analysts estimate that earnings will fall by 68% next year to $0.58 per share, and then surge to $4.62 per share in 2021. The lumpy earnings outlook would certainly be enough to scare off any ordinary investor, but Bill Ackman is no ordinary investor.

Starbucks Corp. (SBUX) has been one of the better performing stocks of 2019, with shares racing higher by over 37%. It is easily better than the S&P 500’a gain of about 26% over the same period. However, investors do not appear to be optimistic for the future, with sellers outpacing buyers by approximately 2-to-1 during the third quarter.

The significant stock advance in 2019 has also stretched the company’s P/E ratio. Given the prospects for future earnings growth, it doesn’t bode well for the future direction of the stock price either. It could be one reason why investors were eagerly leaving the shares in the third quarter. 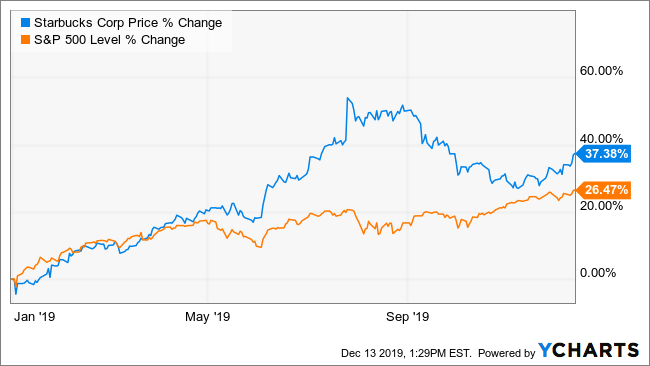 During the third quarter, the total number of 13F shares held by institutions fell by almost 4% to 818.5 million from approximately 847.7 million in the second quarter. During the quarter, 503 institutions added to their existing positions, while 97 created new ones. Conversely, the number of firms decreasing their positions was at 858, while 64 sold out of the stock. Also, the number of firms holding Starbucks among their top ten holdings in their portfolio fell to 81 in the third quarter, down from 89 in the second quarter. 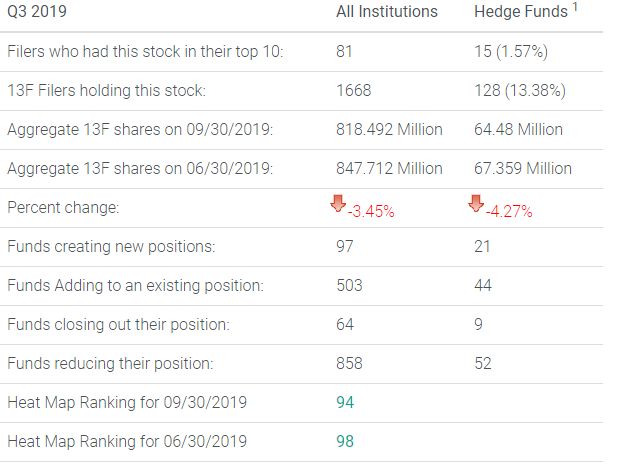 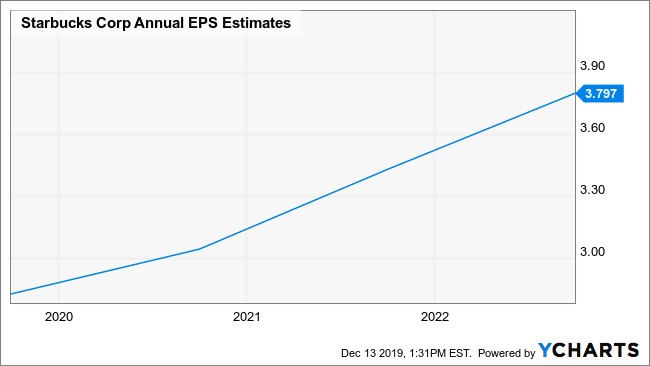 The problem is that the stock currently trades for roughly 26 times fiscal 2021 earnings estimates. That price-to-earnings multiple is not cheap when adjusting for future earnings growth. Earnings growth for the next three years is forecast to grow at a compounded annual growth rate of 10.3%. It means that the stock trades with a PEG ratio of about 2.5. That is much higher than a range of 1 to 1.5, which is considered to be a reasonably valued PEG ratio.

The slow earnings growth and high P/E ratio may be one reason why the stock has slumped some since peaking at a price of around $100 in late July. It may also be the driving force behind investors fleeing the stock during the third quarter.