Zillow Group Inc. (Z) will report results on August 7. Analysts are forecasting Zillow to have seen significant revenue growth during its second quarter. Currently, revenue estimates are for $586 million, 80% greater than the same period a year ago. The significant increase in revenue isn’t expected to translate into earnings growth, with the company forecasted to lose $0.22 in the second quarter.

The strong revenue growth may be one reason why investors have been flocking into the stock. The equity has risen by more than 55% in 2019,  which is more than two times greater than the S&P 500’s gain of around 17%. The stock was so popular that it was added to the WhaleWisdom WhaleIndex 100, on May 16. 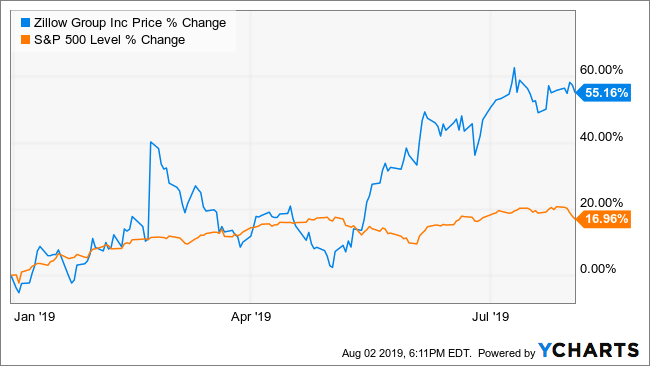 The stock landed on the WhaleIndex due to a rising number of institutions that held the stock at the end of the first quarter. The total number of 13F shares held increased by 5.1% to 144.2 million. The number of firms increasing their positions was at 103, while 52 created new holdings. There was a total of only 60 firms that reduced their stakes and 22 that sold out of the equity.

The big jump in revenue for the quarter comes as the company ramps up its newest business unit called Zillow Offers. This is Zillow’s home-flipping business, where Zillow buys and sells homes.  Zillow recently started offering this service and charges a service fee to customers to complete the transaction. It has created a massive revenue stream for the company. For example, during the first quarter, Zillow generated around $128.5 million in revenue from the unit, selling 414 homes and buying nearly 900.

The new approach from Zillow to drive top-line revenue growth has attracted investors to the stock, pushing it significantly higher in 2019. However, this has come at a cost, because the company took a loss in the first quarter and is expected to do the same in the second quarter. For now, analysts forecast that Zillow will not earn a profit through the second quarter of 2020.

The quarterly results for Zillow on August 7 will be telling. Should the company deliver strong revenue growth and show investors a path to profitability, then perhaps the stock may have even further to climb. If not, then it seems possible that the stock could see a steep loss.