Mastercard Outpaces The S&P 500 As Institutions Build Up Positions

Mastercard, Inc. (MA) saw improved gains over the past month, outperforming the S&P500 and rising by approximately 22.6% compared to the S&P’s gain of about 4.0% over the past year. Hedge funds and institutions were both actively buying the stock in the fourth quarter, resulting in this technology company rising on the WhaleWisdom Heatmap to a rank of 25 from 37.

Mastercard is a financial services and technology company that is a major player in the global payments industry. The company serves as an intermediary between consumers, merchants, businesses, financial institutions, and governments. Mastercard offers payment solutions such as credit and debit cards, payment programs, and prepaid cards. Mastercard generates revenue through fees paid by financial institutions that issue Mastercard-branded payment products used by consumers.

Mastercard saw favorable results in the fourth quarter and the aggregate 13F shares held by hedge funds increased to about 172.8 million from 172.0 million, a mild increase of approximately 0.4%. Of the hedge funds, 46 created new positions, 198 added to an existing one, 64 exited, and 152 reduced their stakes. Institutions were also buying. Overall, institutions increased their aggregate holdings by about 1.9%, to approximately 734.4 million from 720.4 million. 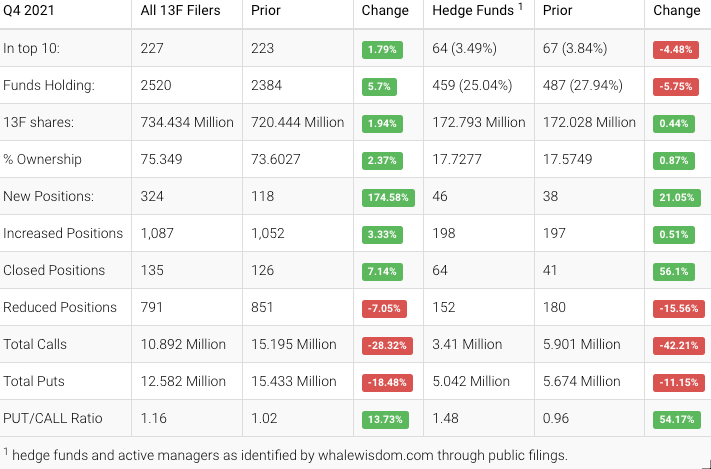 Analyst Ramsey El Assal of Barclays Investment Bank lowered the firm’s price target on Mastercard to $420 from $430 while maintaining an Overweight rating. After viewing fourth-quarter results and guidance, Mizuho analyst Dan Dolev had a different outlook for Mastercard. Dolev raised the firm’s price target on shares to $435 from $400 and kept a Buy rating. Differing views on ratings and values are likely impacted by the competition Mastercard may soon face from Zelle, a digital payments network that some major banks are considering bringing to retail. Seven banks own Early Warning Services, the company that owns Zelle. If Zelle comes to more retailers, it will offer customers an alternative payment option to use in place of credit cards such as Mastercard.

Mastercard’s year-over-year growth is very encouraging for investors, and analysts’ estimates speak to the stock’s future potential. Mastercard may face added competition if some banks choose to broaden payment options. But for now, the company continues to gain ground in the industry.