Palo Alto’s Plunge May Have Created a Long-Term Opportunity

It hasn’t been the most fabulous year for Palo Alto Networks Inc. (PANW), with the stock rising by 20.5% and underperforming the broader S&P 500 by five percentage points. Still, the stock was very active among investors during the third quarter, resulting in the shares landing on the WhaleWisdom Heatmap, and the WhaleWisdom Whale Index 100.

Palo Alto hit a rough patch at the end of November, when it reported fiscal 2020 first quarter results. The company was able to report earnings of $1.05 per share, versus estimates for $1.03 per share. Revenue also came in better than expected at $771.9 million versus estimates of $767.8 million. However, the company guided the fiscal second quarter to $1.12 per share at the mid-point versus forecasts for $1.30, resulting in the shares falling.  Despite the decline, it didn’t stop the CEO, Arora Nikesh, from making a large purchase of the stock. 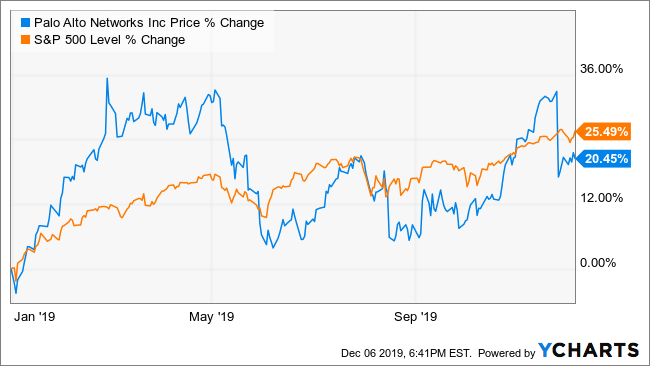 Moving Up the Heatmap

The stock moved up on the WhaleWisdom Heatmap in the third quarter to 85 from 98. Of the top 150 hedge funds tracked for the Heatmap, 21 held the stock in their portfolio, with 8 increasing their positions and 9 reducing them. Additionally, the stock was a top-10 holding in 4 of the hedge fund portfolios. 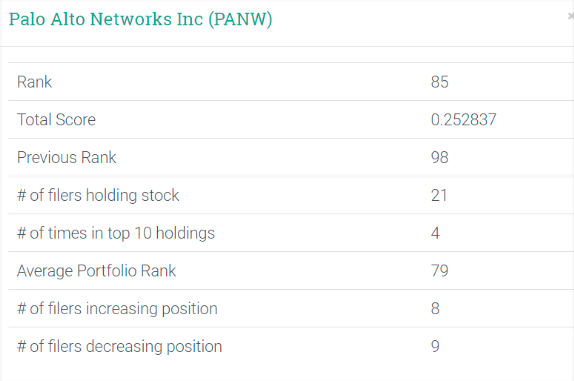 Overall the number of 13F shares held by all institutions increased by less than 1%. Seventy-two firms were creating a new position in the stock, while 264 increased their holding. However, 238 firms reduced their holdings, while 86 sold all of their shares held.

However, despite the conviction among institutions, the company did provide disappointing guidance for the next quarter. It led to the stock declining by over 12% on November 26. More interesting though, is that the company’s CEO bought a significant stake in the equity, according to a Form-4 filing on December 2. The filing revealed that the CEO bought 25,000 shares of stock at an average price of $221.54 on November 27, raising his total stake in the company to 479,429 shares. The purchase came to a notional value of $5.5 million, raising the CEO’s entire stake in the company to over $100 million.

While the company’s disappointing results sank the stock at the end of November, it would seem that the shares are catching a vote of confidence from some brilliant hedge funds, and most notably, the CEO. It could very well suggest that Palo Alto’s long-term outlook may prove to be very bright.