Point72 Asset Management, L.P., which is run by the legendary investor Steven A. Cohen, made a big bet this week in Luckin Coffee Inc. (LK), a China-based coffee chain. A 13G filing revealed that the investment firm took a 5% position in the stock.

The stake that Point72 took in Luckin is significant, and it makes Luckin’s stock the second largest equity holding in the Point72 portfolio, behind only Netflix (NFLX). The market value of the Luckin stake is about $390 million, which is just slightly behind the value of the Netflix stake of $397 million.

The firm filed the 13G on August 5, revealing that it had acquired almost 16.6 million shares,  giving it a 5% stake in Luckin. The new position makes Point72 the fifth largest shareholder behind firms such as Capital Research Global Investors and GIC Private Ltd.

Luckin launched an initial public offering on May 17, pricing its shares at $17. Since that time the stock has risen by over 50% to a price of around $25.75 on August 9.  The company is the second largest coffee chain in China, operating almost 2,400 stores.  The company’s chief rival in China is Starbucks Corp. (SBUX), which operates over 3,900 stores on the mainland.

Point72’s move into Luckin may be due to the big revenue and earnings growth that analysts are projecting for the company. Analysts are currently forecasting revenue to rise to $3.7 billion by the year 2021 from just $125.3 million in the year 2018. That comes to an astronomical compounded annual growth rate (CAGR) of almost 210%.

The Stock May Be Cheap

If the growth forecast for Luckin proves to be correct, then Point72 could be getting a steal at the stock’s current valuation. The equity currently trades at roughly 14 times 2021 earnings estimates. Starbucks currently trades at almost double, with a 2021 PE ratio of 27.3. However, Starbucks does not offer investors nearly the same earnings growth. The company is forecast to see its earnings rise to $3.54 per share in 2021 from $2.83 per share in 2019, an increase of about 25%. 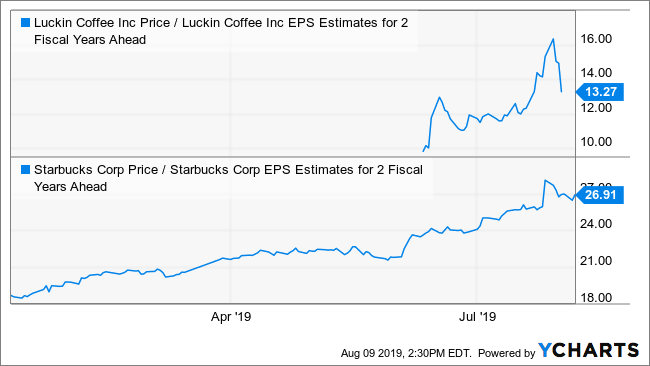 Point72’s move into Luckin could be for the long-term, especially if the company can deliver on analysts’ forecasts.