Qualcomm Inc. (QCOM) saw its stock rise sharply in the second quarter and is having a big 2019, with shares up 29.7% versus an S&P 500 that is up by 13.5%. The strong start to 2019 has landed the stock on the WhaleWisdom heat map in the third position from a previously unranked position.

The strong performance followed news that Apple Inc. (AAPL) would drop its lawsuit against Qualcomm. Meanwhile, the two companies also signed a new licensing agreement.  The news sent shares of Qualcomm soaring by as much as 56% from April 15 through May 3.

The Rest Were Selling 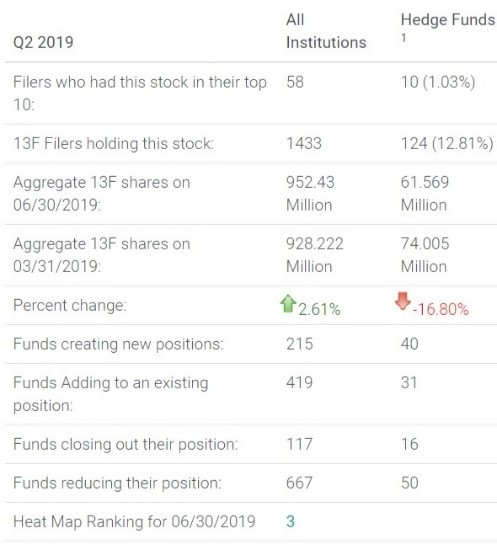 Interestingly, while the top hedge funds were buying the stock, the rest were dumping it. The total number of 13F shares held declined by nearly 17% to 61.6 million. In total, 40 funds created new positions in the equity, as 31 added to their holdings. Meanwhile, 50 were reducing their exposure, as 16 closed out their positions.

The settlement with Apple does remove some of the uncertainty that has been surrounding the stock for some time. Additionally, it does offer some visibility for Qualcomm’s path forward for revenue and earnings growth.

Growth has been hard to find for Qualcomm over the past few years, with years of declining revenue. Suddenly, the company’s fortune has appeared to change, especially as the fifth generation of wireless technology (5G) rolls out, an area where Qualcomm should benefit.

It makes the stock’s current valuation of roughly 17 times 2020 earnings estimates desirable. Based on earnings growth for the year 2020, the stock trades with a price to growth PEG ratio of less than one, at 0.72. It means shares of the company are cheap.

Should revenue and earnings growth prove to be as strong as estimates, then the stock’s recent advance may only be a starting point.