Why Facebook May Once Again Deliver Better than Expected Results

Facebook will report second-quarter results on July 24. Analysts estimate that the company will earn $1.86 per share, an increase of 7% versus last year, while revenue is expected to climb by almost 25% to $16.5 billion.  The company has a history of topping those earnings estimates, which could be one reason why some very well known hedge funds are holding the stock.

According to data compiled by Whale Wisdom, four very well-known hedge funds own the social media giant. The four funds are Tiger Global Management, LLC., Hound Partners, LLC., Coatue Management, LLC, Appaloosa Management LP, with each having between 5% to 10% of their portfolio invested in the stock as of the end of the first quarter.

The stock has recovered from its steep sell-off in 2018 after data breaches and privacy concerns made investors wary, resulting in the stock’s sharp decline. Additionally, the company had to invest a tremendous amount into strengthening its security, which has been a drag on the company’s margins and reduced earnings growth. That margin compression is one reason why analysts are looking for strong revenue growth this quarter, but weak earnings growth. 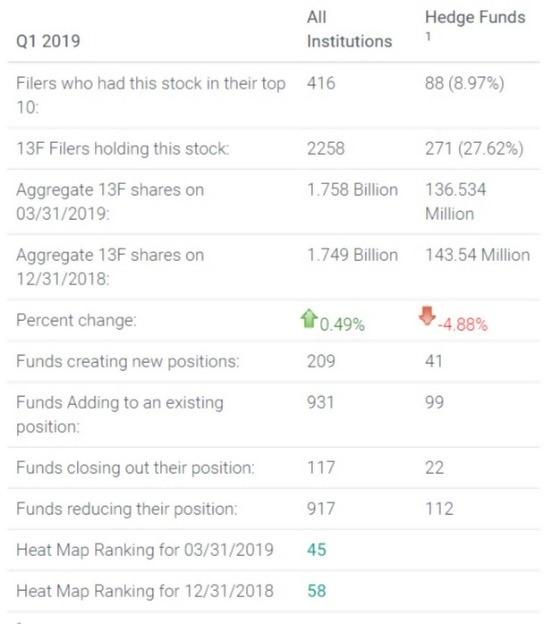 The four funds hold a large concentration of the stock, with the equity ranked as either the third or fourth-largest holding in their portfolio.  The market value of the total holding among the four funds is about $2.6 billion at the end of the first quarter.

What is interesting is that despite the conviction that these four well-known hedge funds have, the rest of the industry was taking profits. During the first quarter, the total number of 13F shares held fell by almost 5% to $136.5 million from $143.5 million. In total, 41 funds created new positions, while 22 exited the stock. Additionally, 99 added, while 112 reduced their holdings.

With second-quarter results for Facebook around the corner, it will be interesting to see if the company will continue its streak of topping investors’ earnings expectations, or if they will fall short. With some of the most well-known hedge funds taking significant stakes in the social media company, it makes it hard to bet against a Facebook disappointment.